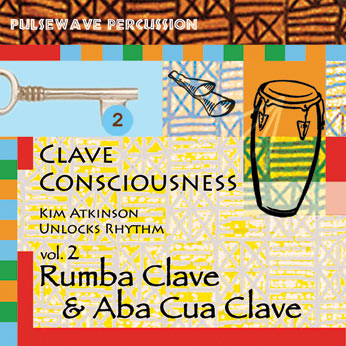 Clave [pronounced kla’-veh] is the essential code to many styles of percussion based music, music which is formed of separate, repeating, interlocking rhythmic cells. Clave is both the keystone that holds all the pieces in balance and the guide to the sonic landscape. It is a clue to the puzzle of how the pieces fit, and the cornerstone of the music structure.

Clave Consciousness is my term to describe my awareness and understanding of this key rhythmic principle. I encountered it in Nigerian and Ghanaian drumming and songs, Cuban music, Latin Jazz jam sessions, Brazilian music, drum circle and more. Within Clave based music, embodiment of and expression within this key pattern is an essential goal. The rhythms of the world that are based on Clave display endless ingenuity, grace, beauty and simplicity.

Musicians work with Clave accents in a nearly unlimited number of ways to build and vary patterns.

As a Clave based rhythm deepens through repetition, layers of alternating suspension and resolution come into play, expanding the groove. Slight variations become extremely powerful and a soloist can easily create interest. This is the magic of playing in Clave.

The use of the word Clave as a contemporary musical term is most connected with Cuba, where Clave is so important in the folkloric and popular music that is could be considered a philosophy or musical approach. The influence and popularity of Cuban Music in America and around the world has lead to the use of the term “Clave” by non-Cuban percussionists, dancers and rhythm enthusiasts.

Clave like patterns exist in many forms of music and are heard as bass lines, horn parts, melodies, solo and accompaniment rhythms for guitar, voice or piano. Clave patterns are used as breaks and cues as well as percussion parts.

In parts of the world where people do not use the word “Clave”, a musician might refer to a Clave-like pattern as “the agogo rhythm for Maculele”, “a caixa pattern for Samba”, ” a gankogui pattern for Highlife” or “the sangba part for Dansa”. I use the Cuban word “Clave” to create a unified concept for describing, measuring, recognizing and distinguishing patterns in African Diaspora music.

How does Clave work?
The Clave accents fall on, right before, and right after certain beats – in specific proportion and sequence – generating an interlocked sonic field that naturally builds momentum into a tight, smooth, insistent groove that inspires the singers and dancers.

The five, irregularly placed Clave accents shape the feeling of the groove. They give power and swing to the regular four beat pulse underlying the music.

and as the clef sign in music notation, which is the key to the five line musical staff.

Se me olvido la clave → I forgot the password.

la clave del caja fuerte → the code to the safe

Clave means the keystone of an arch – a great advancement in architecture.

You can start anywhere in the program that feels good to you, and go either forward or backward to fill in the gaps in your understanding. When you have done all the lessons in this program, you will have a thorough understanding of this most important pattern in music.  What you can learn here applies not just to African Diaspora music, but to all of RHYTHM.

I teach you the patterns from the inside out. We start with a simple counting system anyone can do, and progress through three other forms of musical counting. As we count and clap the patterns in different ways,  you learn to feel the underlying continuum that the Clave implies.

Each level of challenge teaches you more about the rhythm and how it feels in music.  When you’ve learned one level, you can go to the groove sections and play the pattern along with me.  The shakers and foot tap will help to lock the feeling into your body.

I show you how to play the patterns with single stroke motion, the basic logic of hand drumming. This teaches you how to apply Clave based patterns to conga or djembe.

The lesson ends with 25 minutes of Clave grooves at different tempos for you to play along with.

There is a tremendous amount of material in these multilevel lessons. Listen casually and jump into the program where ever you feel comfortable.  Practice the pattern until you feel relaxed with it, then go to the groove sections and see if you can keep Clave with me or play your drum along with the groove and feel into how the rhythm works.  You could repeat this for a few days, weeks, or even months, depending on how much time you practice.

A basic process for learning rhythm is to learn one thing very well, then combine it with another to form a composite. This composite, formed of two things, can now be perceived as one thing to which other things can be added.  In this way your understanding of patterns expands, until you can keep track of several contrasting rhythms. In the these Clave Consciousness lessons you will do that by first becoming aware of the underlying continuum that Clave defines, and then how the Clave pattern relates to, and adds potential to the underlying four – pulse.

When you are comfortable with one part of the program, go to another level of the same lesson, and listen casually and find the next lesson to focus on. In some cases, it may be that a lower level is more challenging, especially if you have previous musical training or experience.  Some of what I present here is so basic that you might assume that it is easy.  Going back to basics and filling gaps in understanding is always valuable.

Next jump to one of the lessons in the 12 beat cycle.  It is challenging for most people to make the connection between the feeling of “4-4 Clave” and “12 Clave” – but this is essential to real understanding of how these rhythms work.  Practice with the corresponding groove to lock the feeling into your body.

Your job in these lessons, is to use your mind and body to play and hold the specific proportions of the 5 stroke sequence, as multiple layers of rhythm are added. The more you focus on these Clave patterns, the more you will realize the organizing principle at work.

After you have internalized some Clave patterns, I invite you to use them as a reference point to measure and contrast other patterns. My Speaking of Rhythm™ series teaches you this by showing you how to speak the drum parts while clapping the Son Clave pattern and keeping the main beat.

To learn music you must copy it into your body with the right feeling. The best way is to do that is by learning to speak and sing its phrases. If you do this combined with movement, you will gain a whole body memory of the event. Your body becomes the store house of information. The drum is an amplifier for your musical feelings.

Pulsewave
" Yesterday I heard thunder and saw lightning when you were talking about clave... Your teaching inspires stuff like this. This a way beyond normal teaching-learning. This a becoming spiritual exchange. It's big time and I'm ready."
Greg , 1989
Pulsewave
"As some one who has played, studied, performed and recorded with Kim Atkinson for over 20 years, I can heartily recommend any thing that he puts out. His information is always impeccably clear and correct and he is one of the best teaching communicators I have ever seen. ...
I love his Clave Consciousness CD Volume one. It is a must for any serious player. And for the drum Circle facilitator it puts all universal rhythms into perspective."
Arthur Hull
Pulsewave
"I got to see part of your Clave workshop in Seattle and it totally changed how I hear and teach drumming. "
N.H.
Pulsewave
"... your CD Clave Consciousness - Volume 2 is superb! I really enjoyed the learning experience. In fact, it led me to a greater appreciation for "Clave Consciousness - Volume 1" - Super material and instruction."
H. April, Chicago
Pulsewave
"Your CD is excellent. I'm beginning to understand Clave after all these years. Thanks!"
Seth
Pulsewave
"I have been using Clave Consciousness for over two years with my conga students, and I highly recommend these CDs. By counting different ways and using the voice to make the accents, my students are able to both understand the clave patterns and learn the 'feel' at the same time."
Brad Hamilton, Bateria Director G.R.E.S. Sambão Para O Povo
Pulsewave
"You're definitely a Gifted Teacher! … I've never been able to get any kind of music theory down when it comes to drumming, I've always just been able to pretty much play whatever rhythm you tossed at me. ... I listen to your Clave CDs on to my IPOD again and again and I'm gettin' it.  Thanks a bunch! "
Sean B.
Pulsewave
"I am very excited to have a group of students coming to the festival this year specifically to look for your class. My students all loved your class and I am certainly on my way to an even greater understanding of the Afro-Cuban music we love, thanks to your CDs! Thank you Kim! "
Jim Renn Spokane, WA
Pulsewave
"The lessons on this disk will enable just about anyone to master son clave and the 12 bell pattern if they take enough time. I can think of lots of applications for this, i.e: learning clave and bell to be part of an ensemble, to teach, to understand cross rhythms. This disk can be useful for beginners in percussion, those new at music or more advanced percussionists who are new to clave. The possibilities for its use go on and on."
Robin Zickel, drumset artist
Pulsewave
"...the greatest benefit of your classes and CDs came to me as a salsa dancer, by improving my ability to hear and understand the Clave. ... this has made my enjoyment of salsa music and dancing that much better. Thank you again!"
J.R., Spokane, WA