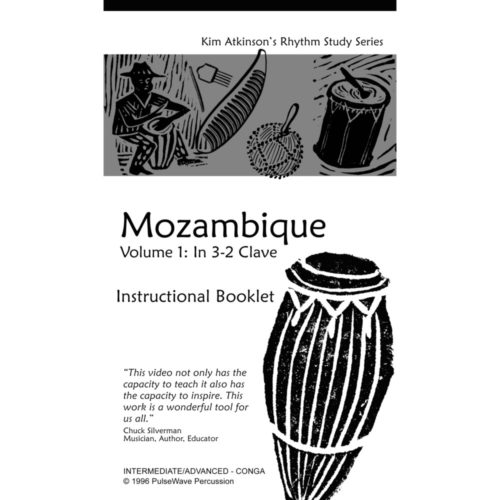 “This is an excellent opportunity to learn the original Mozambique in a straight forward and well designed format. The material is broken down slowly and carefully, with clear explanations. Highly recommended! “

“Kim Atkinson’s Mozambique video is extremely well done. The approach is very user friendly. The explanations are clear and the camera work and sound are good quality. This is one of the best videos on the market.“

Although very popular in Europe, authentic “roots” Mozambique has remained unknown in the USA.  Thanks to cold war politics, we have heard only the “New York Mozambique” style of Eddie Palmieri and others. But the Cuban original is a whole different animal, a funky parade groove built from the bottom up with bombos (marching bass drums), bells, congas, and the ever-present clave. The rhythm’s Cuban creator, Pello el Afrokan, offered Atkinson an extended tutorial in Havana some years back, so the information presented here is truly firsthand.

Chart learners will enjoy the enclosed booklet that lays out the full notation; workshop learners can key on the spoken “gn, go, pa” drum language; and players of every skill-level will appreciate the “once again — slowly” approach to the intricate rhythmic layers. “MOZAMBIQUE, VOL.1” is presented skillfully and patiently by a veteran instructor whose guiding principle is that every learner deserves to “get it.” This will be a hard act to follow, but rumor has it that “Volume 2″ is already in the works.”

“… Kim  Atkinson studied with Pello in Havana in 1985. During the course of his lessons, Pello asked Kim to take the MOZAMBIQUE out to the world and make it famous again. This video is a result of that request. The video is a concise presentation of the MOZAMBIQUE and includes a short history and a breakdown of the individual bell, tumbadora and bass drum parts in relation to rumba clave. The parts are then played together. The second half of the video features the MOZAMBIQUE in combination with Songo and Bata rhythms. A transcriptions booklet is included with all the parts written in both staff notation and a time-unit-box system. Perhaps the best aspect of the video is that the parts are first played individually and fully explained with the clave. The part are then played in a group making it possible for the viewer to hear what the rhythms sounds like.”

“The instructional opens with a 5 person combo performance, segueing into a brief section on the origin and development of the rhythm by Cuba’s Pello El Afrokan. It’s origin as a carnival rhythm and the factors which resulted in the original Mozambique becoming a dance craze in Europe are touched on. Kim explains that the New York style of Mozambique most people are familiar with probably originated from Eddie Palmieri’s album “Mozambique”; this form will be covered in Volume 2 of the series.

It’s very fortunate that Atkinson is such a meticulous and gifted teacher – there is a wealth of information and parts presented on the video. The clave, multiple bell parts, two bombo parts, and conga parts are presented clearly. In addition to the notation in the provided booklet, Kim counts out each part while playing it, in both 1/8th and 1/16th notes. He even speaks slowly through the various conga patterns using a set of drum-sound syllables. All parts are demonstrated one at a time in combination with clave, which appears in a split screen box.
It’s great to have a video where the teacher breaks the more complicated patterns down into smaller chunks, and repeats each chunk – as well as the resulting whole – long enough to really understand and play along. There’s none of the “4 bar demo, rewind and squint again” syndrome in this video! Atkinson is articulate and is obviously having plenty of fun playing what he describes as one of his favorite rhythms. Here’s someone who knows how to teach!

In addition to the opening 5 person performance, the video includes ensemble performances of 4, 8, and 9 players, adding shekere, multiple bombo, bell and conga parts. There is obvious attention to detail in the editing, as each section of the ensemble is isolated so its’ part can be clearly seen and heard in the context of the larger group performance.
The video includes performance arrangements of a Mozambique-Songo, as well as a Mozambique-Bata. There is also a three drum / one person adaptation of the conga parts. Suggestions and demonstrations for soloing in the rhythm are included.
All in all this is a really great product for anyone interested in learning more about Mozambique. You’ll come away with a fantastic set of arrangement options for groups of anything from 3 people to a whole parade!
VERY highly recommended! ”

“MOZAMBIQUE! VOLUME I” is an excellent instructional video. Grounded in Atkinson’s decades of extensive study in African and African American forms, this video is based upon his study in Havana with Pello el Afrokan, the creator of the rhythm Mozambique. Kim really wants you to get this one: the video shows the drum parts–and their defining bell parts–separately and in ensemble, both up close and wide. He tells you–and shows you– how to play it on one or multiple drums; it’s even got dance steps! The accompanying booklet has the rhythm written out in graphic form and in musical notation. It describes the history and context of Mozambique, and, best of all, the musicians really enjoy what they’re doing–it shows, and makes you wanna do it good, too. A+”

“This wonderfully instructive and entertaining video should be in the collection of every percussionist interested in Mozambique. Kim Atkinson, who is clearly an expert performer and teacher of these rhythms has created an easily understandable demonstration of all of the components of Mozambique, including the clave and campana patterns, tumbadoras (congas) and the high and low bombo (bass drums). Each rhythm is clearly explained and performed at a slow tempo. Atkinson counts each rhythm out loud, both in eighth notes and sixteenth notes, and the accompanying booklet provides written versions of the rhythms using conventional notation as well as the Time Unit Box notation that was developed at UCLA as a way of notating African rhythms.

The video concludes with ensemble performances featuring various combinations of instruments, which allow the listener to hear how the different rhythmic parts combine to create the compelling Mozambique rhythm. This is an outstanding video that will go a long way toward “demystifying” these rhythms.”

“Kim Atkinson has produced an instructional video of exceptional clarity, depth of knowledge and technical excellence covering the AfroCuban musical style called ” Mozambique.  Kim had the opportunity in 1985 to spend time in Cuba studying with Pello el Afrokan, the acknowledged inventor of this rhythm.  Pello named the rhythm after the East African country because he saw the name on a map, liked it and wanted to remember it.  The rhythm and dance was created as Carnaval music, and became very popular in Europe in the sixties, however, due to the adversarial relationship between Cuba and the US, this lively style had little exposure here. What did catch on here was a style Kim calls “New York Mozambique,” which can be traced to Eddie Palmieri’s album “Mozambique.” It can also be heard in the drumset styles of Frank Malabe, Chuck Silverman, Steve Gadd and Dave Weckl.  Kim promises to cover the New York style in a second volume on Mozambique. What is presented here are examples of Kim’s arrangements of the original Cuban rhythm, including clear breakdowns of parts for clave, bells, congas and bass drums. The core of the music is the 3-2 Rumba clave. The rhythm is then played in combos of three, four, eight and nine players, and is further illustrated in a Songo style with snare drum, and a Bata style, both with large combos. This is one of the clearest, most organized, and well-paced videos I’ve had the pleasure to watch. Kim is relaxed and natural in front of the camera. The production is absolutely professional, with comfortable lighting and the use of many cameras. Kim wears a headset mic so you can hear him clearly, and all the instruments are well balanced. The conga parts are shot over-the- shoulder, so it seems you are standing right behind him. Finally, Kim makes a great effort to acknowledge the originators and masters of this music, Pello el Afrokan and the Cubans who continue to develop this beautiful art form.”