This is a bell pattern for the Afro-Brazilian rhythm Ijexa’ (pronounced “ee jay shah”), which is part of the Candomble’ religion. The rhythm is also known as Afoxe’ (see glossary) and has had wide dissemination through the Carnaval group “Sons of Ghandi”, one of the oldest and largest Afro groups to parade through the streets of Salvador Bahia, Brazil each year in the days before Ash Wednesday.

This pattern and the feeling of the Ijexa rhythm have become part of the musical signature of Bahian musicians and are especially evident in the music of such popular artists as Gilberto Gil, Daniela Mercury and Margareth Menenzes.

Learn Afoxé on congas and bells

In traditional folkloric usage, the pattern is often started in the middle of the phrase written above, on the third “H”. This effectively reverses the order of the two halves and creates a “2-3 clave” feeling. In contemporary usage with guitar, bass, keyboards etc., the pattern is most often played as written, which creates a “3-2” clave feeling. A good example of this is the song “Tenda do Amor – Magia” by Margareth Menezes.

Several melodic variations on the pattern are common, such as playing the first four strokes on the high bell, then one low stoke, then three more high and one more low. When played this way, the low bell reinforces one of the main drum accents of the rhythm.

Here is what the pattern looks like written in staff notation. Pitch is relative. The usual interval is a third, sometimes a fourth or fifth.

To feel the pattern in its reverse orientation as mentioned above, start in the middle of the bar, on beat three. If you rearrange it in one bar, it looks like this.

This bell pattern is a very easy rhythm for most people to feel. Have fun with it.

I’ve created an arrangement of Afoxe’/Ijexa for my Bateria with a Samba type orchestration of three surdos, two bells, snare drum, tamborim, and ganza. Have a listen here: 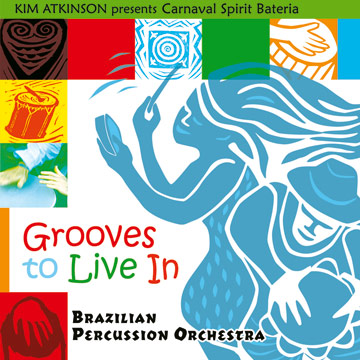 We give thanks to those people who have made it possible for us to learn and share these ancient rhythms.